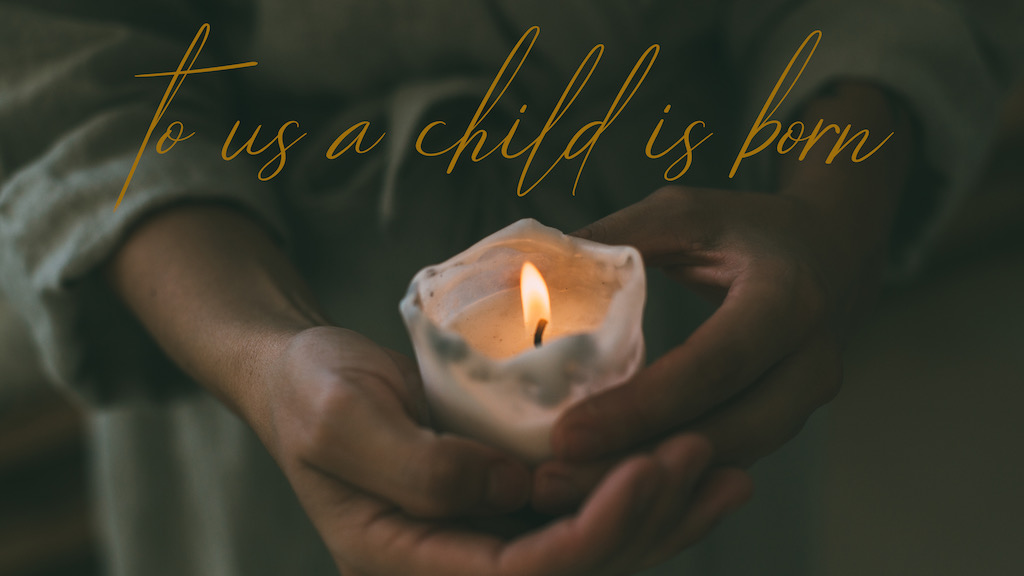 Welcome to the second Sunday of Advent and in our Advent teaching series we find ourselves in the book of Isaiah, chapter 9. Let’s read our scripture passage together:

The people walking in darkness
have seen a great light;
on those living in the land of deep darkness
a light has dawned.
[…]
For to us a child is born,
unto us a son is given,
and the government will be on his shoulders.
And he will be called
Wonderful Counselor, Mighty God,
Everlasting Father, Prince of Peace.
Of the greatness of his government and peace
there will be no end.
He will reign on David’s throne
and over his kingdom,
establishing and upholding it
with justice and righteousness
from that time on and forever.

Last week Melanie Salte spoke about how this Child will be called Wonderful Counsellor. She pointed out that this Child did not come to be our own personal therapist but came as an incredibly wise King whose plans and purposes for everyone are just and true—how much we need that Godly Wisdom in our world currently. Today I want to talk about the second phrase in verse 6, “Mighty God”.

Several years ago, while travelling to Barcelona I had the opportunity to visit the Sagrada Familia. This amazing cathedral, designed by artist Antoni Gaudi, has been under construction since 1880 and it will likely take another 20 years to complete. The building is filled with light. Photos just do not do it justice. The columns branch at the top and are designed to create the appearance of a forest. The stained-glass windows let in soft light that makes you feel like you are in an intimate clearing in a glade.

Like all Christian cathedrals, the Sagrada Familia is built in the shape of a cross. It has a long central nave and the arms, or transept, extending east and West. At the outside ends are the façades.

On the eastern end is the nativity façade. This massive wall depicts the events surrounding Christ’s birth. It is absolutely joyous: the stones, intricately and elaborately carved, seem alive, organic. The nativity façade is about the nativity story and the blessings that will come to everyone because of the presence of Christ in our world. There are carvings of fruit, vines, animals, and crowning it all is the massive tree of life, a metaphor for Christ’s ultimate return and restoration of fruitfulness, justice, peace, and righteousness.

At the western end of the transept is the passion façade, in contrast to the exuberant nativity façade. The Passion façade is stark, empty. It depicts the suffering of Christ on his way to the cross. The stones are plain, smooth, with very little decoration. It is austere. The figures are minimalistic with just enough detail to be able to recognize them.

So, why am I showing you this? These contrasting images of joy and sorrow, blessing and desolation, and fruitfulness and barrenness represent the background theme of the entire book of Isaiah that we find ourselves today. In this prophetic book, written some 800 years BC, there is the promise of God’s blessing on His People.

For the Lord will comfort Zion;
he will comfort all her waste places,
and will make her wilderness like Eden,
her desert like the garden of the Lord;
joy and gladness will be found in her,
thanksgiving and the voice of song.

Arise, shine, for your light has come,
and the glory of the Lord rises upon you.
Nations will come to your light,
and kings to the brightness of your dawn.

Then you will look and be radiant,
your heart will throb and swell with joy;
the wealth on the seas will be brought to you,
to you the riches of the nations will come.
Herds of camels will cover your land,
young camels of Midian and Ephah.
And all from Sheba will come,
bearing gold and incense
and proclaiming the praise of the Lord.

I could show you many other examples in the book of God’s desire to bless his people, to heal their land, to give them peace, to help them walk in Shalom. But the other great theme in Isaiah is that of barrenness and desolation of the land and its people, sometimes as a result of natural disasters but often as a consequence of when the people turn away from the Living God and fall into disobedience and rebellion.

The very first chapter of the book outlines some of these details:

Why do you persist in rebellion?
Your whole head is injured,
your whole heart afflicted.
From the sole of your foot to the top of your head
there is no soundness—
only wounds and welts
and open sores,
not cleansed or bandaged
or soothed with olive oil.

Your country is desolate,
your cities burned with fire;
your fields are being stripped by foreigners
right before you,
laid waste as when overthrown by strangers.

It is the last verse that is the backdrop to today’s passage, especially the part about the coming of foreigners to lay waste to your land.

At this time of writing Isaiah 9, Judea and the city of Jerusalem were in a crisis. It was a crisis on 3 levels:

Into this turmoil God sent the prophet Isaiah who preached to the people: it is not too late, turn back to me. Renounce your false gods, I want to bless you and heal your land. He also went to King Ahaz and said, above all, do not make a political alliance with the pagan Assyrians. God will protect you and heal your land.

This is the immediate context for these famous words that we read every Christmas.

For to us a child is born,
to us a son is given,
and the government will be on his shoulders.
And he will be called
Wonderful Counselor, Mighty God,
Everlasting Father, Prince of Peace.
Of the greatness of his government and peace
there will be no end.

To the people living in those times—under threat of military occupation, in a time when the crops were failing, and violence was everywhere—don’t these verses sound like really good news, that God wants to come and do something? That God wants to come as Wonderful Counsellor and Mighty God? The Hebrew word for Mighty used here has the implications of political and military force; God as a mighty warrior, capable of defeating an enemy with physical strength.

What would you do if you were King Ahaz? You have this crisis, things are looking bleak, really dim. But, you have the voice of the prophet Isaiah saying the Living God is Mighty, turn back to Him, trust Him, and He will bless and protect you.

As it turns out, Ahaz did not heed the words of the prophets. As the military and political crisis deepened, he went so far as to sacrifice one of his own sons to the Canaanite gods. He made a political alliance with the Assyrians, which only averted disaster temporarily as Jerusalem eventually was conquered in 597 BC.

This is the back story of these verses, and the story of the Jewish King Ahaz who goes down in history as the king of compromise, the spiritual leader who followed the path of least resistance, and the man who relied on his own wisdom and strength during difficult times rather than trusting in God.

I want to take you back to where I started this morning, looking at those two façade of the Sagrada Familia. Which one summarized your own view of life right now? I would suspect that many of us would relate to the stark and empty passion façade.

For many, the barrenness goes much deeper. Uncertainty over your employment, concern over the health and safety of loved ones, pressure in marriage and family, uncertainty over the future of our church; the list grows ever longer as the global crisis deepens.

As you look at your life and the world around you what do you think about the promise in Isaiah 9? That this Christ Child is Wonderful, Counsellor, Mighty God, Everlasting Father, Prince of Peace. For me, I think that it can be a bit hard to draw a straight line between those verses and the world today. As I drilled down into my own heart this week I found some things that seem to get in the way of that:

But here is the thing, that very baby in the manger is the most powerful illustration of how much God cares for His world and His people. The very Creator and Sustainer of the universe chose to be born in an obscure corner of the Roman empire, to a 16-year-old peasant girl in scandalous circumstances, and using a feeding trough in a barn as a cradle. It doesn’t get much more nitty gritty than that.

Power and strength from God’s perspective looks a bit different from ours. God’s power and God’s strength looks something like this. This is the altar of the Sagrada Familia, a point in the church midway between the nativity and the passion façades. At the cross, God’s power over sin and death is revealed. Through the cross, Jesus becomes our Emmanuel, God with us. Through the power of the Cross Jesus Himself comes to dwell, to live in us through the power of the Holy Spirit. Jesus is with us; in every day, in every relationship, in every situation, messy or not. That is what the Power of God looks like. That is what the babe in the manger, the Mighty God does for us. Even when your life looks barren and fruitless, even when you look to the future and you don’t see much joy there. Jesus has given us the power of His presence.

Question for reflection today: How does the presence of the Mighty God, Jesus our Emmanuel, make a difference in your life today?

As you reflect on this my prayer for you, Calvary, is that you will see, perhaps for the first time in many months, the hand of Jesus outstretched to you, in provision, in comfort, in wise council, and strength.

Amen. God bless you during this Advent season.