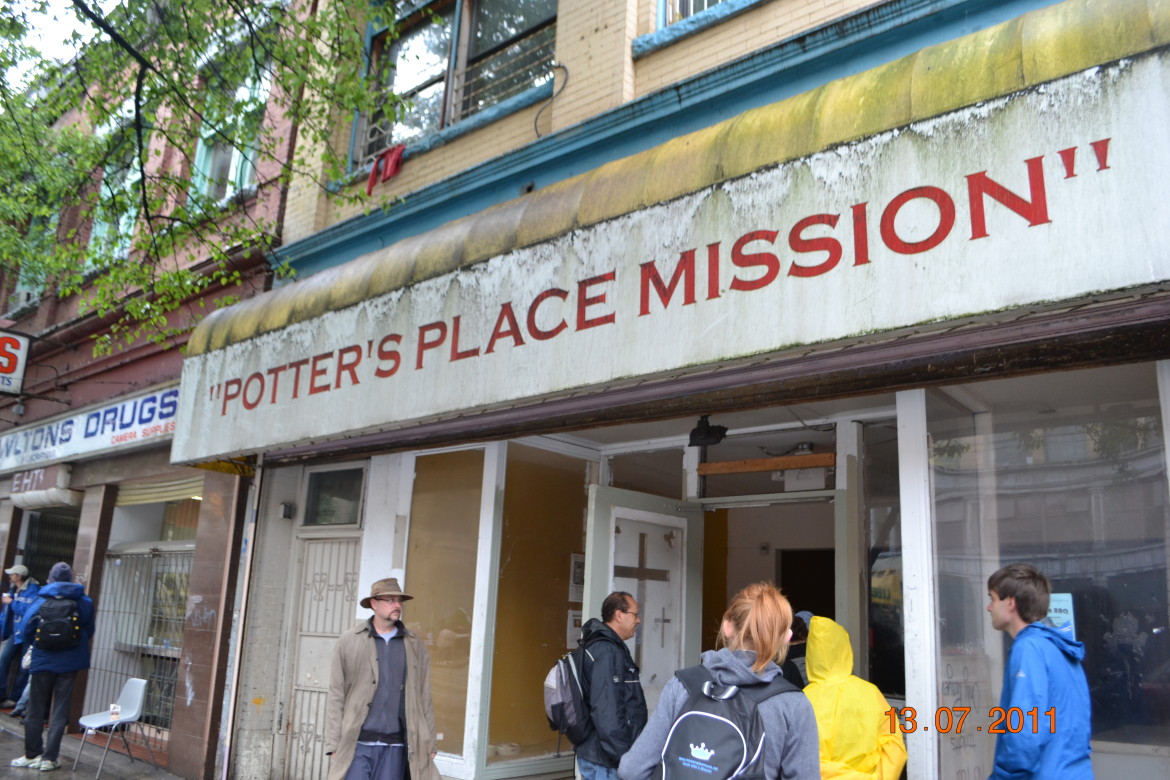 On Thursday we visited Potter’s Place Mission, which was started with and is still operated by Deborah, an incredible Korean lady. She explained to our group that God called her to East Hastings while she was comfortably pastoring a church in another, much nicer part of town. She felt God telling her to go and start a community church where she could preach the Gospel. Deborah acquired real estate on Hastings for the exact amount of money she had, which was actually half the property value, and there she started her church.

When this women talks, it’s with power, and her faith is immense.

She told our group story after story of how fresh and healthy food comes in to feed those that attend her church. It is not abnormal for them to pray for chicken, and have a chicken truck stop randomly to ask if they need chicken, and fill up their freezers. She said they never buy food anymore, they simply pray and they have never missed a meal.

Deborah even started a Bible college where she believes passionately in equipping those who the Lord touches at Potter’s Place. 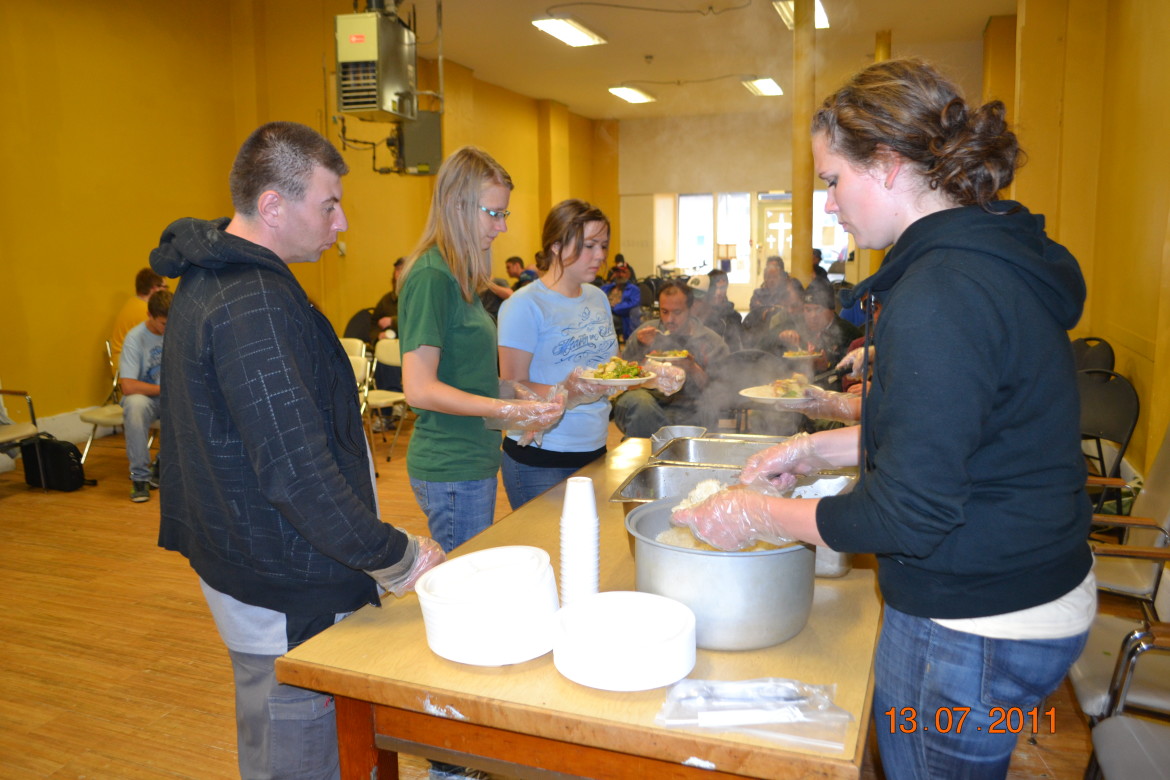 We worked hard with Deborah today… Matt and Stephen framed walls so people would stop breaking in and sleeping in her office and meeting room areas. The girls downstairs: Jaclyn, Emma, Hayley and Ally probably sorted and packed more soup cans into bins to go to the Phillipines then they thought was humanly possible. These girls worked hard breaking their backs-kudos!

Those in the basement: Spencer, Angie, Tim, Ken, Mike, Daniel, Rachel and Greg endured perhaps the toughest job of all: cleaning out bins that were full of rat droppings, so they could pack cans into them. Upstairs, Ariele, Erin and myself sorted and cleaned, so many mouse droppings *shutter* 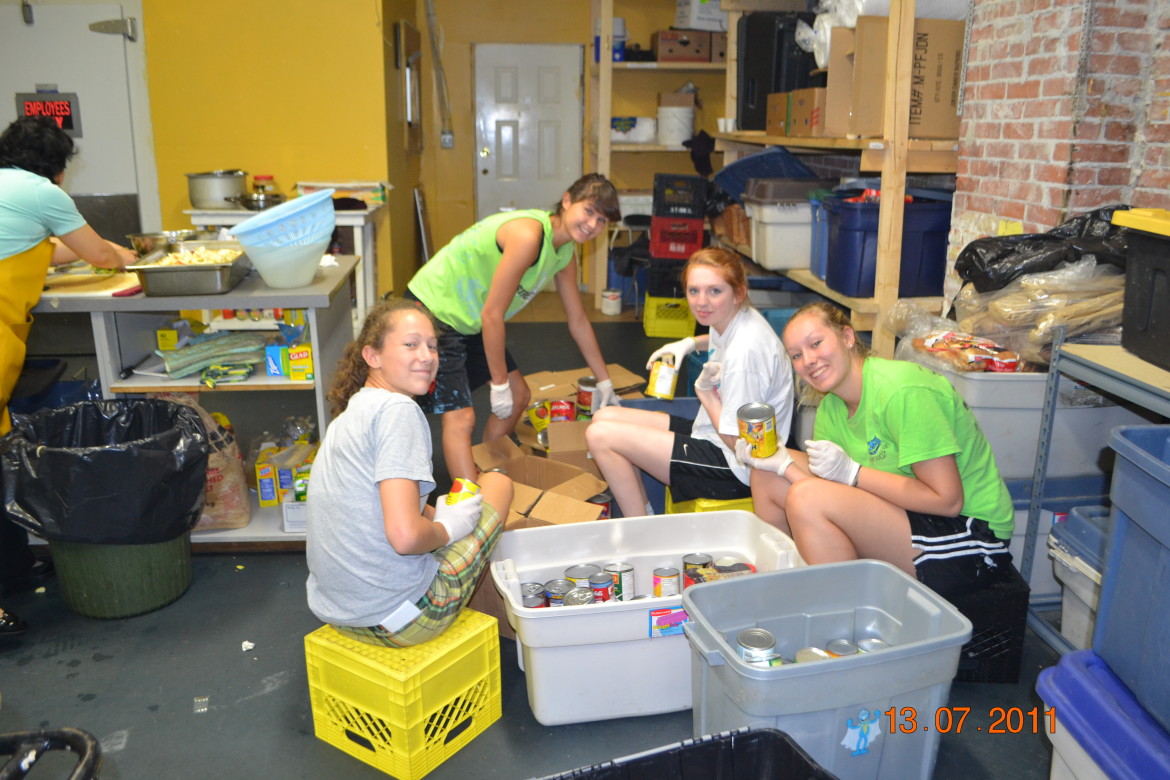 Just thinking back on all the sweaty trips Spencer made up and down the stairs and intense carpentry skills Matt and Stephen were putting into action, I think our team did an amazing job and had a great last day on Hastings.

The last three days highlighted, in my opinion, the most inspiring individuals of the entire trip. They all did ministry differently, but the core was essentially the same.

These people got their hands dirty in relationships.

These people listen when God speaks.

These people see the homeless as God does.

These people don’t give up, even when it hurts beyond words.

I think these are the people that Jesus is talking about when he says that so many heroes in the kingdom of heaven will go unnoticed in this life. They get little reward in this life for what they do, but the creater of the universe takes note of them.

I think we are all called to ministry, but a life ministry… and this may have not involve  the poor what so ever. But as Steve at Jacob’s Well encouraged us all to look at the ones who are the marginalized individuals in our own life. Who do we know who has been pushed to the margins and forgotten, and how can we involve ourselves?

I think the biggest thing that I have come to learn over this trip is that as Gordie, Jacob’s Well, and Deborah at Potter’s Place explained, many people never change, some year after year remain the same and it’s not easy to be faithful. However, they all feel God has called them to be faithful regardless of the outcome.

Jesus said the poor you will aways have and I know that this is true. Some will come to know him and be those flickering lights of hope, but these, for the most part, are the exception.

At the end of the week Greg had us all share what God taught us on this trip or what happened in our hearts as a result of this trip. The answers from the team members were so different but all really impacting. Ken shared how it affirmed what God has for him to be doing. For Daniel and Tim they learned about teams and how community can teach us so much about ourselves. God taught Ariele about overcoming fear and being bold to believe God will answer prayer. I think it’s safe to say we all learned a lot and I think most of it we are still mulling over. Much of this knowledge  has probably embedded itself into our hearts more than our heads.  I know this trip changed every person on it. Affirming that He has a plan for every single person who is willing to stop compartmentalizing their life but instead pick up their cross and follow him however different and unseen that may be.

2 Comments on ‘The Potter’s Place’