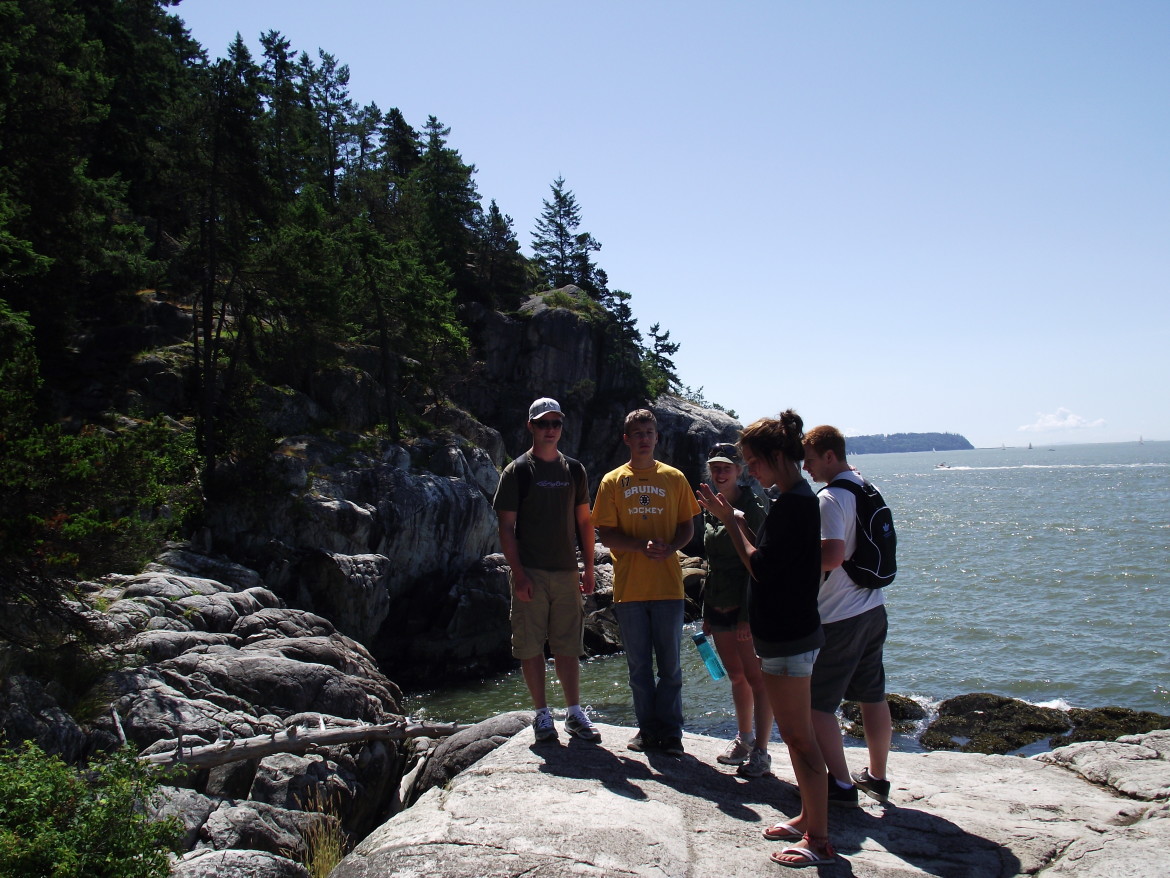 Saturday – Hike to it!

This weekend YWAM has planned fun activities to show us more of Vancouver’s scenery and help us to rest up for the coming week. Today we took a “nature walk” as it was described to us. Therefore, majority of our team wore flip flops…. Now if that was a nature walk, I would hate to see what YWAM calls a hike. Lighthouse Park is a beautiful place if you want to hike; it has rugged terrain with rocky lookouts and lush canopy. It most definitely highlighted the beauty of this coastal city. 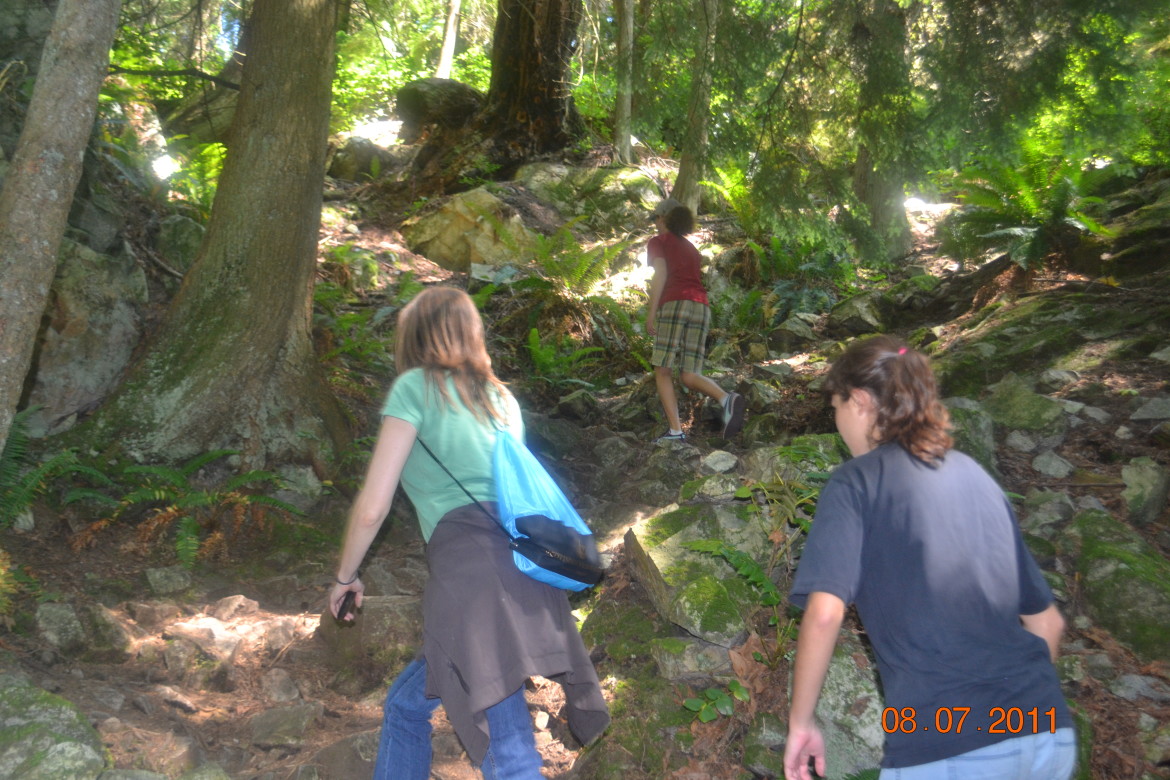 Our team, however, was dropping like flies with injuries. Matt walker kicked it off by showcasing his Parkour tricks. After impressively kick/flipping off a tree trunk, he gracefully slid penguin style onto the gravel road. Poor guy! The next to eat it was Rachel, running as happy as a kitten hopping on a bedspread when she lost her footing and scraped up her legs, hand and shoulder. Ally fell scraping up her hands/thigh and Spencer messed up his elbow after chicken fighting on an oversized log with Stephen. Even I fell victim to injury when I tried to show off my hiking abilities in my platform sandals and rolled through gravel and dirt cutting up my legs (I think my pride was hurt the most). As you can see, this was no walk in the park as we were expecting, but despite all our ailments, we had a hilarious time and got to see the city in the distance over the beautiful ocean, and that, my friends, was worth it!

I keep forgetting to mention that Tim Lyons’ sister, Tanya, whom I’m sure most of you know, has been joining us most days for our activities. Tanya works at the other YWAM base in Vancouver called Nexia. It is really cute to watch those siblings hanging out. Awww.

After hiking, some of us went swimming at an indoor pool, while others walked the popular area of Commercial Drive and relaxed. And after that, we had a pizza party. Man, if this is missions, then I’m in! Ha, ha.

Even though today was meant to be a relaxation day, some of our team felt the urge to go back to East Hastings and pray.  It was a sunny evening and felt like a great time to see the area in the evening, as we had only seen it in the day. We had planned to go for a prayer walk, which is walking through an area praying for: what you see, what you hear, what you feel and what you think about as you stroll along (and trust me there is no lack of stimulation on those streets).

Ariele suggested we do prayer stations along the streets. I think some of our team weren’t into this idea and I know I personally was planning on passing up this opportunity. But, we brought the prayer station pinnies and half our team went off to Hastings. When we arrived, we had half of the group do prayer stations and half of us went on a prayer walk. Actually, the first group of prayer stationers was all the younger team members, which was really bold. But Greg talked with a couple policemen standing nearby, and they said they would watch out for us.

I was with the group who was prayer walking. I can say that Hastings is a different place at night than it is in the daytime. The atmosphere had a more chaotic and stressful feeling in the air, and many more people were intoxicated. We began to pray and engaged in many conversations. Many people were not fond of us being there. I think it’s because these four blocks are their living room. Maybe they felt judged just by our presence but I think the more we engaged, the more this broke down, because we explained why we were there and that we were volunteering throughout the week. You can tell the residents highly respect the volunteers and organizations in the area.

Interestingly, the prayer stations were a completely different experience altogether. I had thought that the red pinnies and signs would evoke more judgement, but actually they helped to explain that we were there just to be a blessing.  At the stations we had a lot of traffic and received many tipped hats and smiles. Just from a sociological perspective, the prayer stations in this area, compared to the other day in the more affluent community, was way more accepted. After some of us chatted about it, I think we determined that Hastings, as a whole, is actually a less judgemental place. People accept each other more readily and holistically then do the general population. Heather made a good point when she said “we could learn something, something of great value from how these people live”.

These people actually know there neighbours and obviously don’t live in the isolation that much of the N. American world does, going from air conditioned garages to work, and then back again. There is a family unit that forms in this place comprised of many individuals who, for the most part, have been separated from their biological families. A lot of our prayers were for these people’s family members, some they may not have seen in quite some time.

One young man actually asked for us to pray for him for “deliverance” from substances. It was an earnest and bold request. I think probably substance abuse and family were the two biggest themes for prayer.

The night ended back at the base with us hanging out as a team being our usual silly selves. Please continue to pray that God will be teaching and using us here in Hastings. 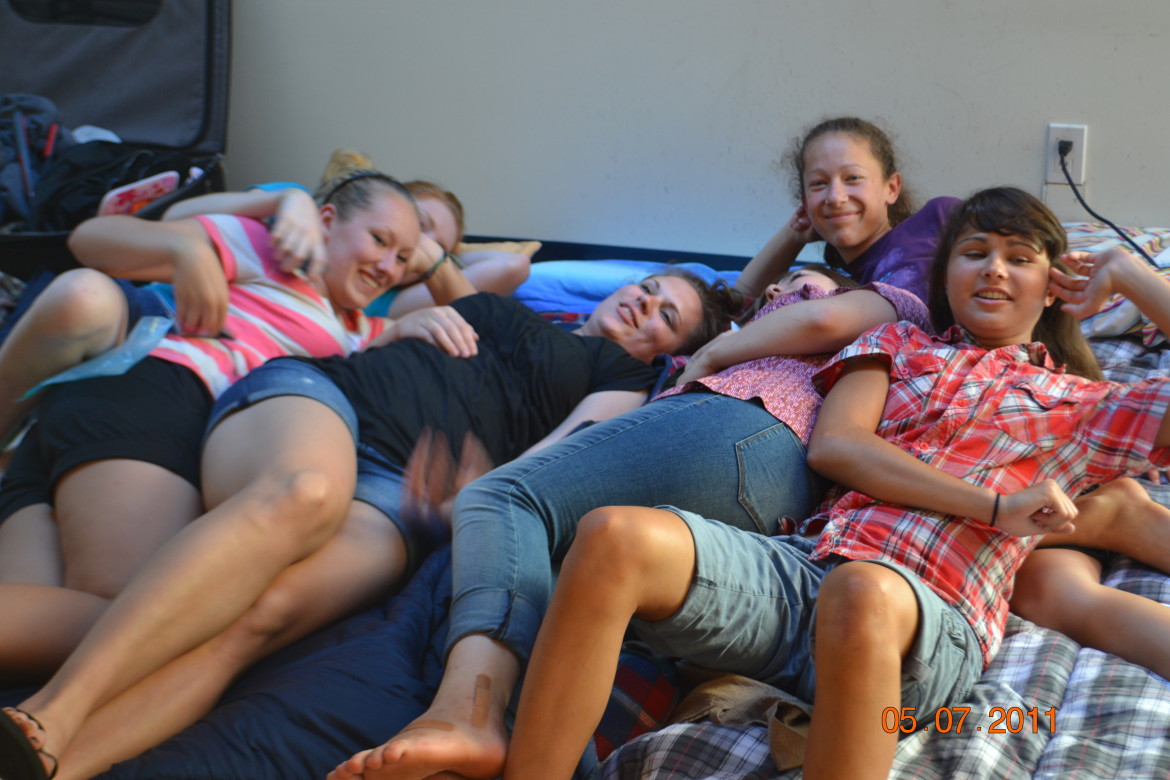