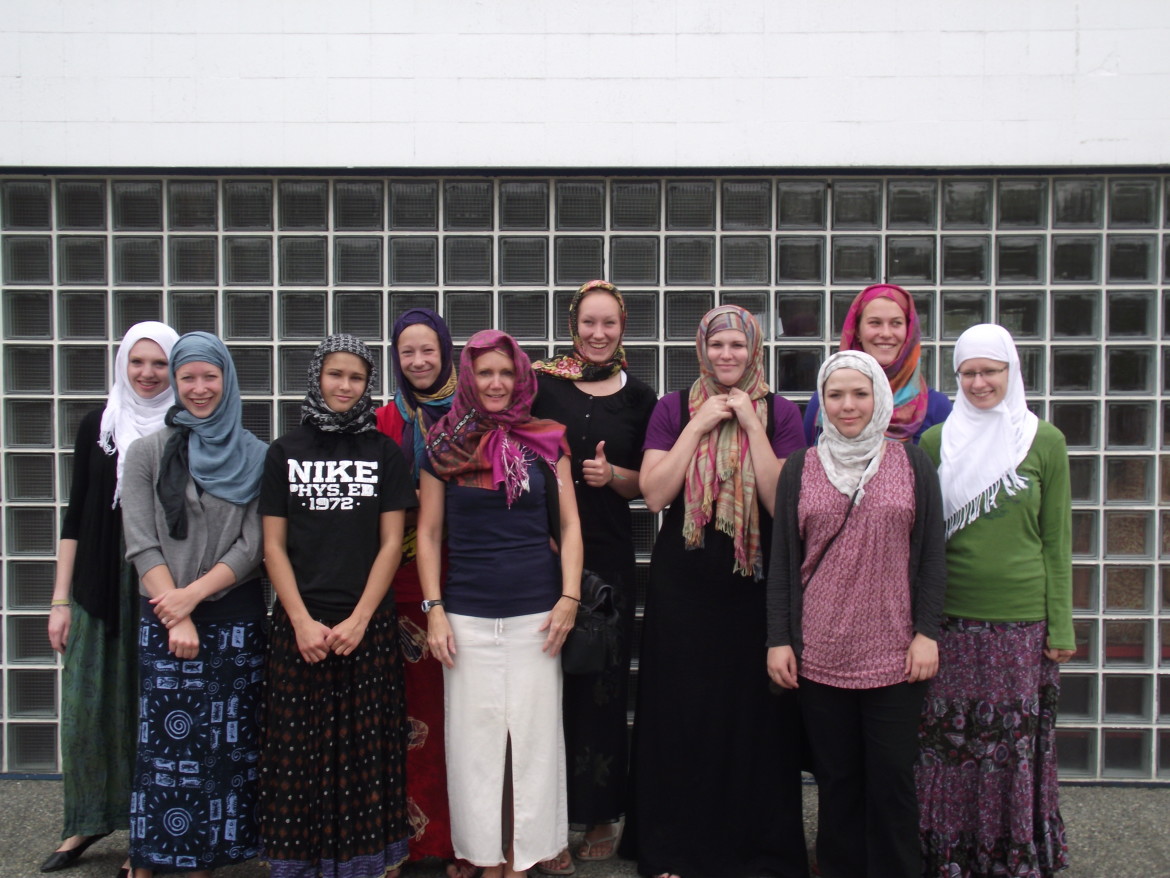 Today was a day I know we were all looking forward to; the temple tour.  We had the privilege of visiting three different world religion’s places of worship, in order to learn about their religion from devout followers. We visited a Muslim mosque, a Sikh Gudwara, and a Buddhist temple.

In preparation for going to the mosque and Sikh temple, us girls wore long skirts and head coverings, and the guys wore dress clothes in order to be respectful as we were entering into these houses of worship. I cannot wait till you see the posted photos of how truly white and tourist we all looked. I think it’s probably safe to say we looked more Hutterite (with Greg as our colony leader) than Muslim, but I’ll let you be the judge 😉

The first place we visited was the Muslim mosque. I know I expected this location to be the most conservative and perhaps least open-minded of the bunch. For YWAM, this was a new mosque location which they had never visited before, so I think we all got a surprise when we arrived. Firstly, this mosque was very new, only finishing its construction in 2007 after a 10 year building program. It was built, as our guide described, as sort of a traditional/modern fusion. It was actually so modern one could mistake it for a high end church or yoga studio from the inside.

And like the building, our guide was also more of a fusion of sorts himself. I think the only way I can describe him is that this guy was the Rob Bell of Muslims! He was fresh, engaging, passionate, and open-minded, and just a really cool young guy. For me at least, this came as a surprise. This guy attended a few years in a Christian school and university as a Muslim, he had worked in media, at one ofToronto’s news channels, and many of his friends are in the inter-faith community.

He explained Islam much in the same way many of us would explain our own faith: a relationship, as something changing and dynamic. We had the chance to ask him many questions and he explained that, like Christianity, much of Islam is distorted in society’s interpretations of it. We learned about various programs, including the popular kid’s favourite: Muslim muppet. I don’t know about you, but for me this sounds a lot like some of our churches. Sure, there were still traditional elements, like all people in the congregation being expected to learn Arabic and pray 5 times a day, but other than that, this mosque’s traditions were probably far from what one would typically think.

That’s the thing about open-minded people; you actually want to talk with them. I felt like I could go for coffee with this guy and we could have a dynamic and interesting, even encouraging conversation. I know a lot of us agreed inter-faith connections are a valuable thing that could be something for Calvaryto consider…any thoughts?

Just as a personal side-note, something I have been processing for a while and especially after this trip is how I didn’t especially want this guy to become a part of the Christian community. Yes, I want him to know the true love of Jesus, but I don’t want him to just change clubs. I think he is a needed part of this community, with a heart that Jesus has transformed. I think that’s why it’s so great that God is in control. We are called to love, to show Christ’s love, but I think I will leave the hard stuff up to Jesus.

The next place we visited was the Sikh Gudwara, which was the first Gudwara built in North America. The building was huge, with outdoor courtyards and one brightly colored and intensely decorated sanctuary. Before we get into the day, I’ll highlight a couple of the Sikh’s core beliefs. Firstly, they believe in universal hospitality, and they don’t just claim it; they try to live it to its core. Did you know Sikh Gudwaras make three meals per day of amazing Indian food for anyone – – yes, anyone who wants to come – – even the homeless. All Sikh temples offer lodging for travellers, if asked, and they are a people of charity. 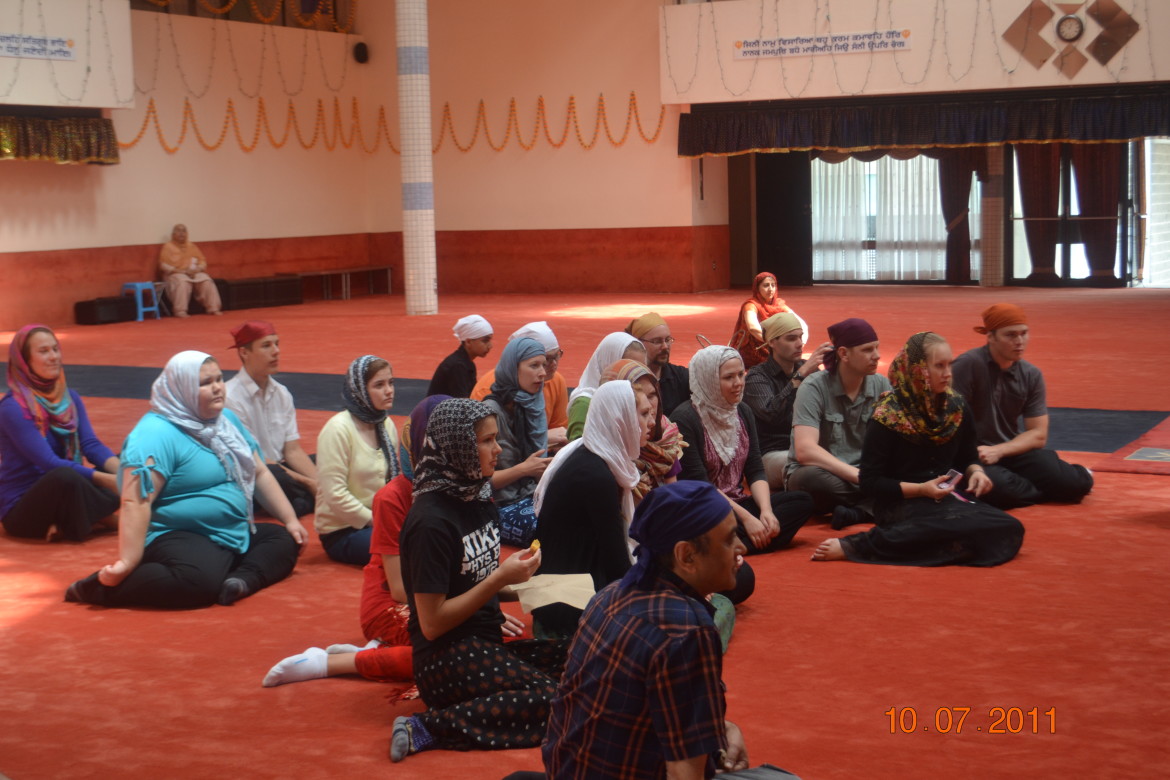 Next, Sikhs believe in one god that is over everything.  They also revere their holy scriptures as the last words of the Guru’s (like prophets) and treat them with the utmost respect. Their scriptures are actually personified and they speak of them almost as if they were a living thing, even putting them to bed at night with different rituals. Sikh’s are allowed to have their own copies of the scripture, but only if they can treat it with the same level of respect. Most Sikhs prefer to read it at the gudwara to ensure they are handling the scripture properly. 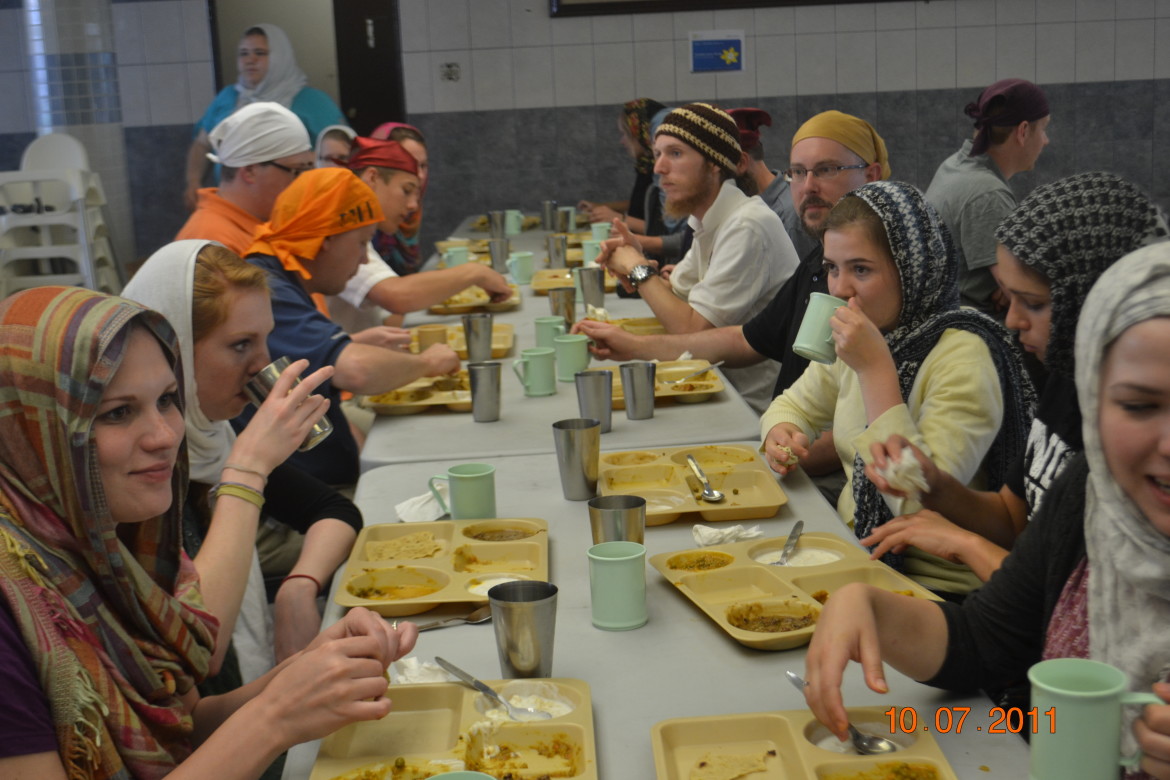 The Sikhs offered our group many sweets, played us a traditional song and even provided us with as much Indian food as our hearts desired. My heart was purr-ing with happiness. I think most of our team really enjoyed the food and everyone did their best to eat it and try everything. Sikhs understand what it means to serve others; they even serve only vegetarian food in their kitchen, so that no one would be offended, even though they themselves are not generally vegetarian. I think there is a heck of a lot we can learn from the Sikhs about how to serve and how to be inviting and loving to everyone you meet.

The last place we went was the Buddhist temple. This temple was also an active monastery and one of the largest temples in Canada. It is a huge tourist attraction, with an amazing building, gorgeous landscaping and ponds filled with fish, turtles and lotus flowers. The guide we had might have been one of the most interesting individuals I (and I’m sure most of the team) have ever met. He explained in a very thick accent that Buddhism as more of a philosophical concept than a religion. Most of our brains hurt after trying to wrap our heads around ideas that were circular in their essence.

The temple was full of offerings to large golden statues such as Buddha. Although Buddhism is a peaceful religion and makes a connection with nature, it was hard for us to understand. Arielle was explaining to Erin that it bothered her that she couldn’t make sense of this religion, and I though Erin made a good point about it probably being more important to understand who would be drawn to these religions, like what it is they are looking for, than fully understanding the religion. Ultimately, it’s primarily about our interest in people, and the need of their heart. It made me feel fortunate to know I have Jesus as a living God who I don’t have to reach a certain benchmark to please in order to avoid reincarnation, or that I need to think in contradicting circles to grasp. 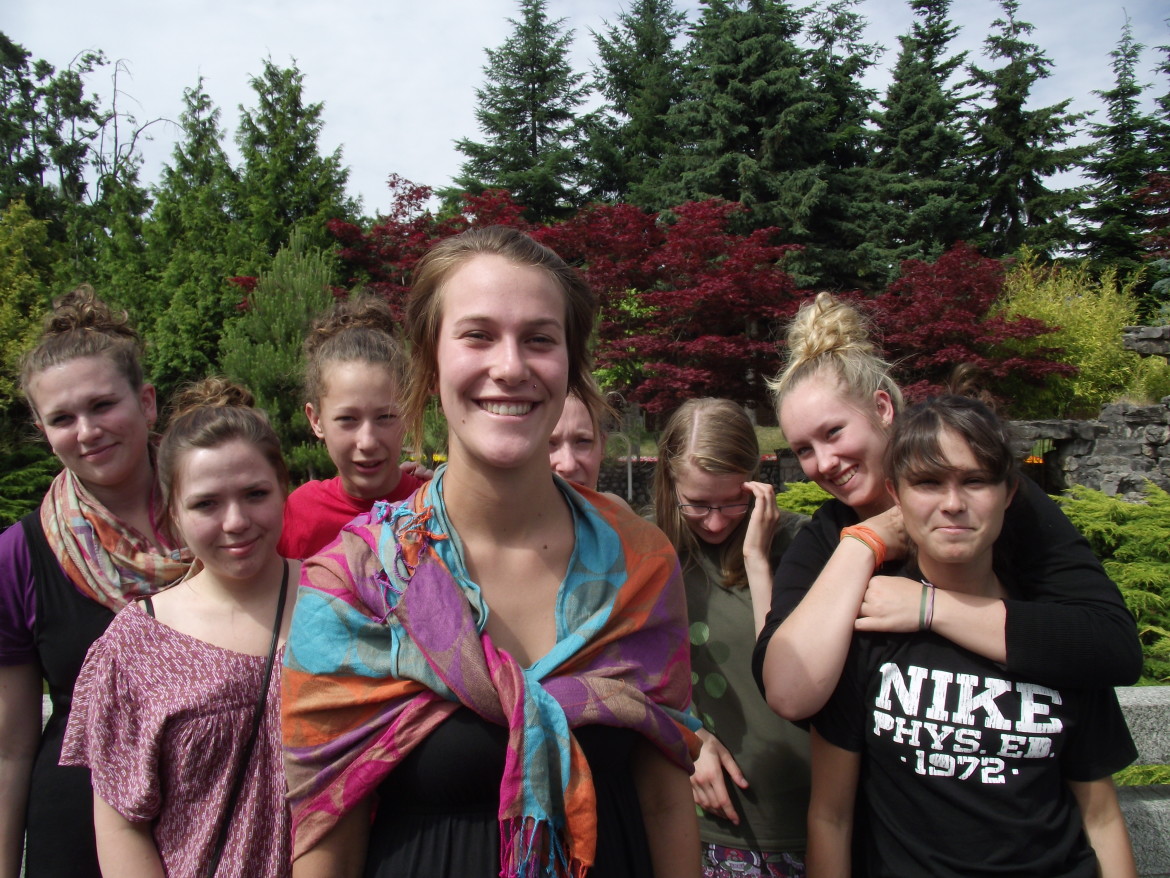 The tour gave our entire group a greater understanding of what other popular world religions believe. For many of us, it wasn’t a time where we learned how they were wrong, but a time that we saw our similarities and how we can better love and encourage them into the Kingdom. I think God has a place in his heart for understanding and humility, because it’s truly through the quality of our relationships with others that we are changed and Jesus can be shown.